While everyone has their own opinion this is just mine, and I recognize it might differ with other Girona residents.

We live in the La Devesa neighbourhood and have remained here for the last 14 years. We were  lucky to have arrived in this ‘barri’ on our first visit. Little did we know then that it ticked a lot of our boxes. Conveniently situated for access into Girona old town, Girona’s bus and train station, plus four supermarkets. Plenty of cafes, Devesa park a 5 minute walk away and our kids’ school within eyeshot.

La Devesa is a fairly modern creation as elderly locals remember this area as being just fields and sparsely populated. There are pockets of what look like more older properties but the majority is a swave of modern low-rise apartment blocks. While I’d always felt safe here my kids have had a couple of brushes with low-level crimes committed against them.

Walk a couple of blocks towards the train station and you’ll cross C/ Santa Eugenia. This for me at least, acts as a sort of delineator. It’s where La Devesa ends and the Santa Eugenia area begins, and feels like the wrong side of the tracks.

It’s certainly more built up with taller apartment blocks and a touch grubbier. Please don’t think I’m running it down, I grew up in London’s East End so no hairs and graces here.

Every September the Devesa community organises a neighbourhood ‘festa’ or festival. The highlight is a large communal outdoor lunch, held under the shady rows of Plane trees in La Devesa Park. Long tables are set up, people bring their own drinks, cutlery and cups to enjoy fideua and some music. It’s also a chance to catch up with familiar faces and have a convivial chat-though our little English enclave always sits together. Some things will never change.

Don’t get me wrong, we did a lot of things to get involved with local culture, enrolling our kids into the ‘el cau’ or scouts group. We became more prominent as ‘the English family’ as we also ran an English language school, minutes from our home. Unfortunately as far as diversity goes, this stuck-in-a-time-warp area still hasn’t moved away from it’s apparent white, middle-class image.

The backs of the houses along the river Onyar look ideal and some lucky owners even have a balcony where you can enjoy a well earned glass of local vino and take in the view.

While it’s a real crowd puller for tourists and day visitors it’s quite a different kettle of fish if you’re thinking of living here. Back in the old days it was a less salubrious place to live and had its ‘barrio chino’ red-light area. People were drawn to move to the more modern parts of Girona, into newer better equipped housing.

Lots of narrow, shady streets and alleys, tall old buildings means it depends on where you live if you’ll ever catch the sun. Car parking is more of an issue, restricted to residents and limited spaces. If you can accept all that it could be quite the romantic alternative that some like.Your typical American tourist blogging their way around Europe will, I’m sure, find it a delight.

It’s also a popular hangout spot for visiting professional and tourist cyclists, who don’t mind running their bike up five flights of stairs. Many apartment buildings don’t have a modern lift, those medieval builders never foresaw this useful addition.

This has led to a rise in pricey rental apartments from owners cashing in, but alienating those locals who want to keep it like it was. It’s echoing a similar effect with what’s happening with Airbnb apartments in Barcelona, where runaway tourism impacts local sensitivities.

Life in Girona’s old town is also prone to those negative points of noise from bars, cafes, nightlife goers and tourists. A friend who lives near Girona cathedral can hardly get out of his front door during certain city festivities like the flower festival, or at Easter when many flock to view its processions. For me I’ve got used to enjoying it for a casual stroll through La Rambla, an occasional meal and a weekly pub crawl.

Mention this area and the euro signs start to flicker as it’s one of the poshest areas of Girona. You need to go uphill so it affords good views and has more houses than apartments. It’s quite a way from the old town and Girona’s shopping areas, and there’s little in the way of shops, cafes and bars. However, if you prefer a spacious home with a pool and ample parking this could be the place.

Loosely translated as the ‘mount of the Jews’ it stands high up above Girona and has a mix of upmarket houses and apartments. Girona’s Jewish Museum has a good collection of Hebrew inscribed tombstones recovered from here, as it had a Jewish burial place.

There’s only one long winding road up and once you reach the top all you have is a petrol station, supermarket, pizza take away, bakery and not much else. Plus points are the views but for me a bit too boring, the walk down to the old town would take about a half an hour.

The site of a former glue factory still has its tall brick chimney. A popular residential area with lots of new build apartment blocks, it’s not too far from the commercial hubs of Girona.

Moving further away from the more downtown areas of Girona and uphill again, this is a largely residential neighbourhood that is home to Girona football club’s stadium, certain University buildings and student digs.

If I had to move this is on my bucket list, but rental properties are as rare as hens teeth.

Tucked away just minutes away up behind Girona’s cathedral this tiny village has a special feel about it. Friends that live here say that it’s split into a sunny and shady part, the latter can make it feel a bit damp in winter. Much of the topography makes it quite hilly and the surrounding forests make it popular with dog walkers and mountain bikers. No real shops here except a bakery.

The big plus is its one and only tip-top restaurant Cull del Mon. No better way to spend a leisurely afternoon dining on its terrace or comfy interior. Because of its proximity to local cycle routes the village has become the go to base location for the pro and tourist cyclists. 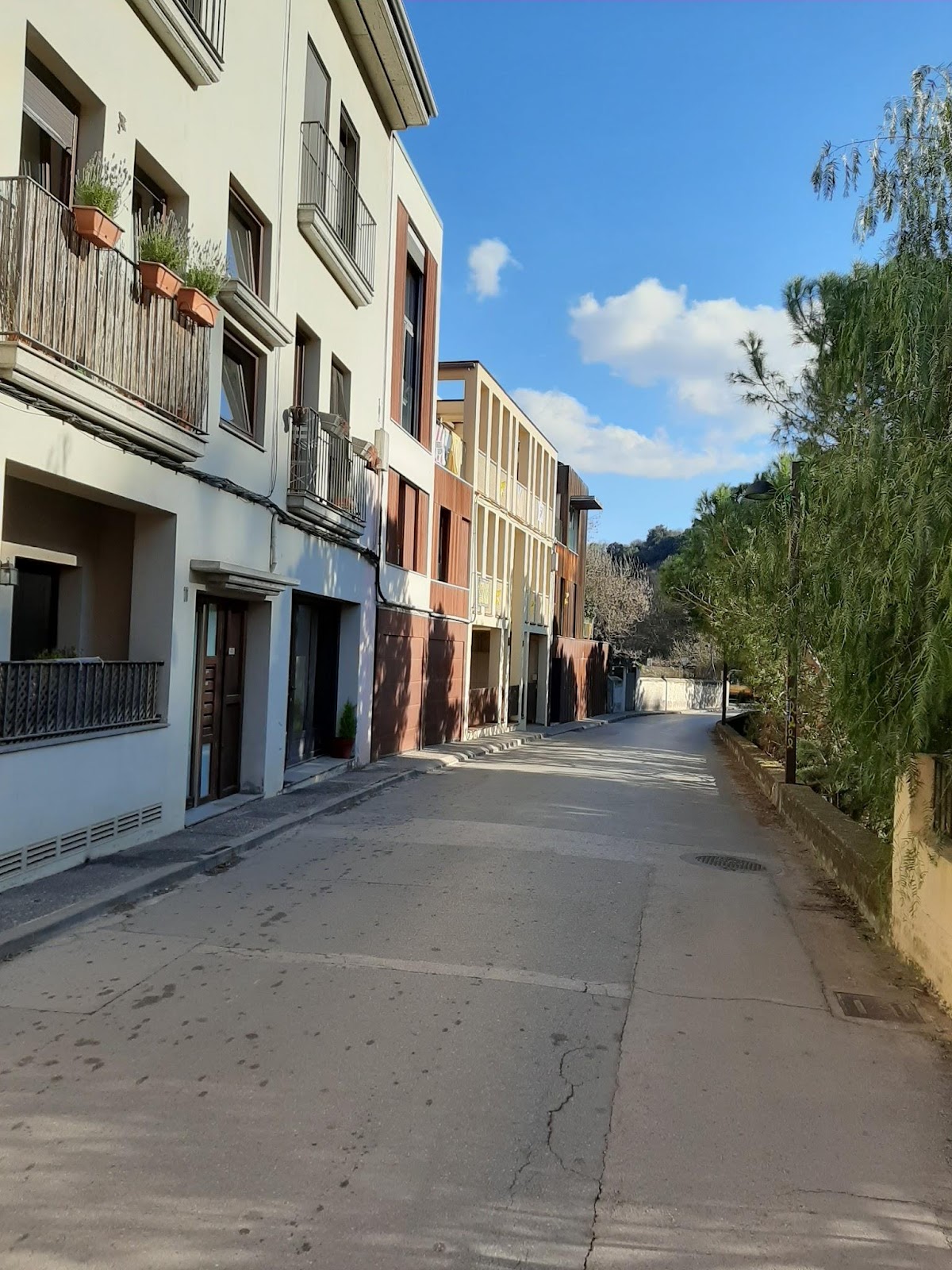 I should mention two satellite villages that have a certain appeal if you’re after the quiet life. Fornells de la Selva has St. George’s International school on its outskirts, a railway station and a solitary cafe-which is closed at lunchtime. Isn’t that when people want to eat?

However, it has its own social centre which serves up a decent set lunch for a modest price. The local old boys sit around playing cards and dominoes, a good place to practice your Catalan. Housing is a mix of old village properties and a lot of new built detached houses and blocks of flats. People with very young families like it but it’s not a place you’d drive through on the way to somewhere else. If you’re into outdoor pursuits the surrounding farmland and verdant countryside make up for the passing tumbleweed!

Villablareix has a quaint historic core and has grown bigger with plenty of low-rise modern apartment blocks. Away from its industrial estate area this village has a bit more life to it, a primary school, bakery, butchers and a pharmacy. There’s a branch of the popular restaurant chain Konigs here too, and one or two more cafes along the main drag. The road through here can take you to the airport via the next village of  Aiguaviva and further on, to Santa Coloma de Farners.

Lastly, Girona areas to avoid. Locals tell me that Vila Roja is where you could easily lose the hubcaps off your car, and maybe the shirt off your back too.