Bars and restaurants have reopened-well some of them have. You do feel for them as it’s been a case of long closures since March followed by a joyful summer of back to normal, then a slow decline to eventual returned closures in late autumn. Current Covid related rules say that cafes can only utilize 30% of interior space which equates to being uneconomic to open for many.

The sight of empty cafes, bars and restaurants is made even stranger when you consider how much they’re a part of daily culture here. No one lifts an eyelid or is bothered by seeing someone having a cana (small beer) or a ‘cigalo / carajillo’ (small black coffee with brandy) at breakfast time.

Sure, there’s plenty who’ll prefer a coffee too or an ‘infusion’- herbal tea. I should also mention the cup sizes here aren’t as big as ones you’re used to in the UK/USA.

People nip in and out of these places all day long. Early starters often pop in for their 1st breakfast (esmorzar), and again later in the morning for their 2nd esmorzar-nice.

I’ve used my local ones extensively in the past as a handy place to conduct my one-to-one English classes. In all parts of Spain the outdoor culture is ingrained and the norm.

Personally I can’t figure out how they can survive if they only charge about 1.70 euros for a coffee. I suppose it’s a numbers game and many are open long hours, from 7am to 9 or 10pm. That wasn’t always the case, many local to me have been taken over by new Chinese owners who stay open for much longer.

It’s also highly competitive as there’s so many here. The enticing offers include a coffee and a ‘mini’ (a very small piece of baguette with a simple filling of cheese or ham) for 2.50 to 3 euros.

By the way these are prices in the more residential areas of Girona. The newer, trendier cafes in the old town which cater more for the uber cyclists have a coffee menu more akin to what you’d see in a Starbucks or Costa Coffee if you’re from the UK. Fair doos, you pay a tad more, get a bigger cup and it’s not bad. One place even lets you leave your bicycle inside.

The one, continual general gripe I have is how tepid the coffee is when it’s served. So much so that I have to ask for ‘leche caliente’ Spanish for warm milk. I never order tea here, it’s just too weak and is served as a herbal tea, with a cup of hot water/tea bag or in a tiny teapot. Don’t expect to find a large mug of sweet tea with milk.

Only time will tell who keeps going and stays afloat, what appears a saturated marketplace somehow always finds its own equilibrium.

N.B. In Catalan milk is ‘llet’ which sounds like ‘yet’, ‘amb’ is with, sounds like ‘umm’ -so join it all together to make ‘cafe amb llet’-coffee with milk. 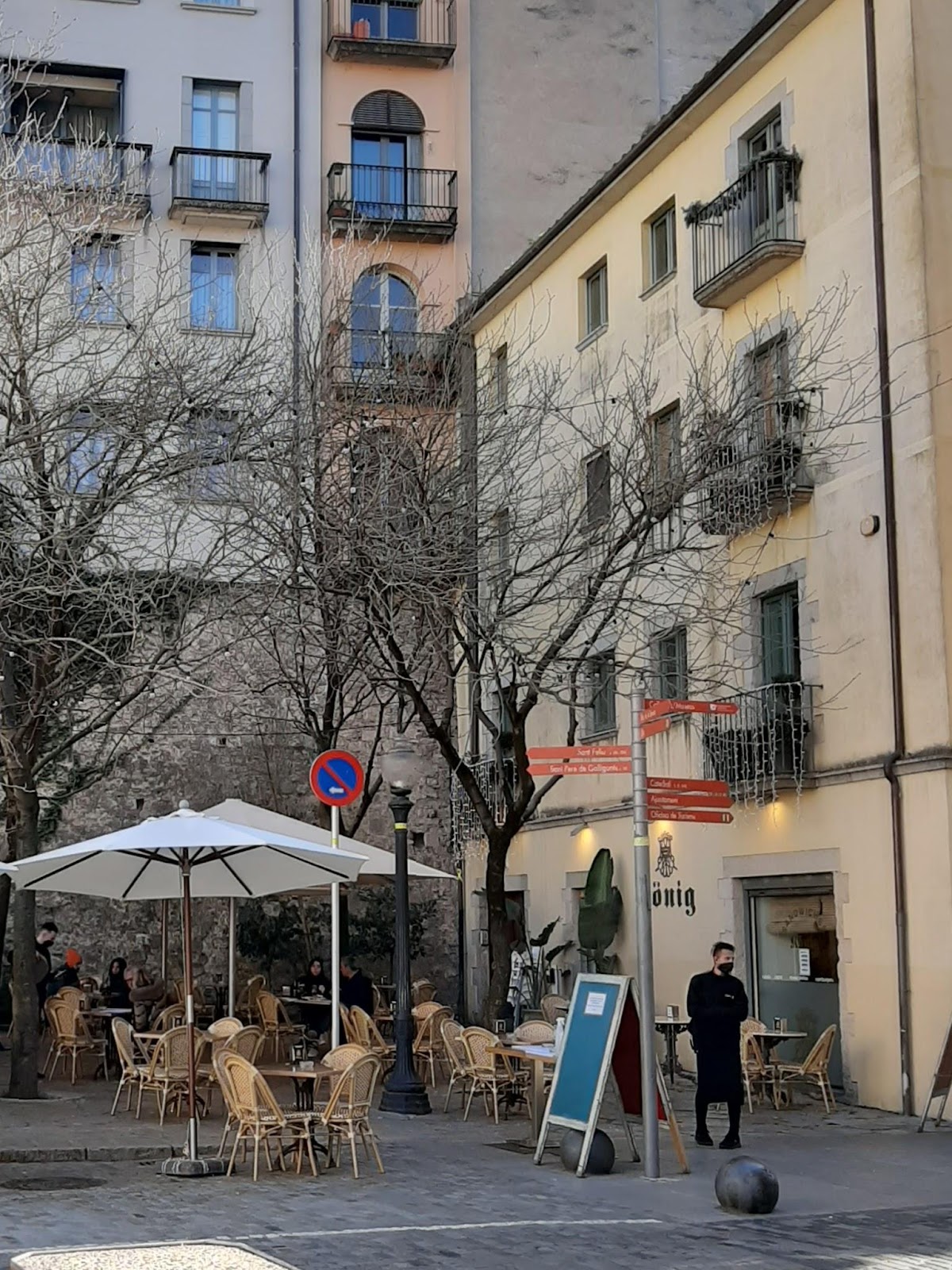 I like to keep my brushes with officialdom to a minimum if I can. Language issue is one reason but secondly, the almost inevitable sinking feeling of not being able to complete what is in most cases a simple task in one go. Let me explain by using one past example.

We had to renew our empadron (registering as a resident in the city or town you live in), this is a document obtained from the local city hall ajuntament/ajuntamiento. Gironas’ is housed within a fine old building in placa del Vi. Off I went with the requisite documents I needed to show. which were all listed online.

First step is the ‘gatekeeper’ who directs you on where to go depending on the purpose of your visit. I already know where I need to go but this jobsworth beckons me forward. Mini interrogation over I enter the section on the ground floor where gatekeeper no.2 sits. I repeat what I’ve just said to the previous drone. You’re given a numbered ticket, sit down in the waiting room and watch the small screen above.

As far as waiting time, this is entering into the ‘how long is a piece of string’ scenario. A quick tally of others waiting is useful but not indicative. Your number eventually appears with a designated table (taula) number. This time around I fail, there’s a problem with my latest rental payment receipt. It’s missing the agency’s official stamp. No explanation on earth will change matters, off you go with your bundle of papers. 1-0 to them.

After wishing I’d rather watch the grass grow I summon the motivation for try number 2, having obtained said agency stamp. I fail again-do these people relish others misery? This time my electricity bill is too old, it needs to be a more recent one. I’m starting to wish this place had a ‘screaming room’ to let of some steam. 2-0 to them.

Third time, paperwork in order I decide to take my Catalan speaking daughter as backup. It’s a Friday afternoon so their minds are set to POETS ( piss off early tomorrow’s Saturday). We breeze in, a cursory glance at my passport, and bingo, we get to the finish line. The documents are printed and handed over. I pinch myself to check it’s really happened.

Was it due to the fact that my daughter spoke Catalan to them-I’ll never know. 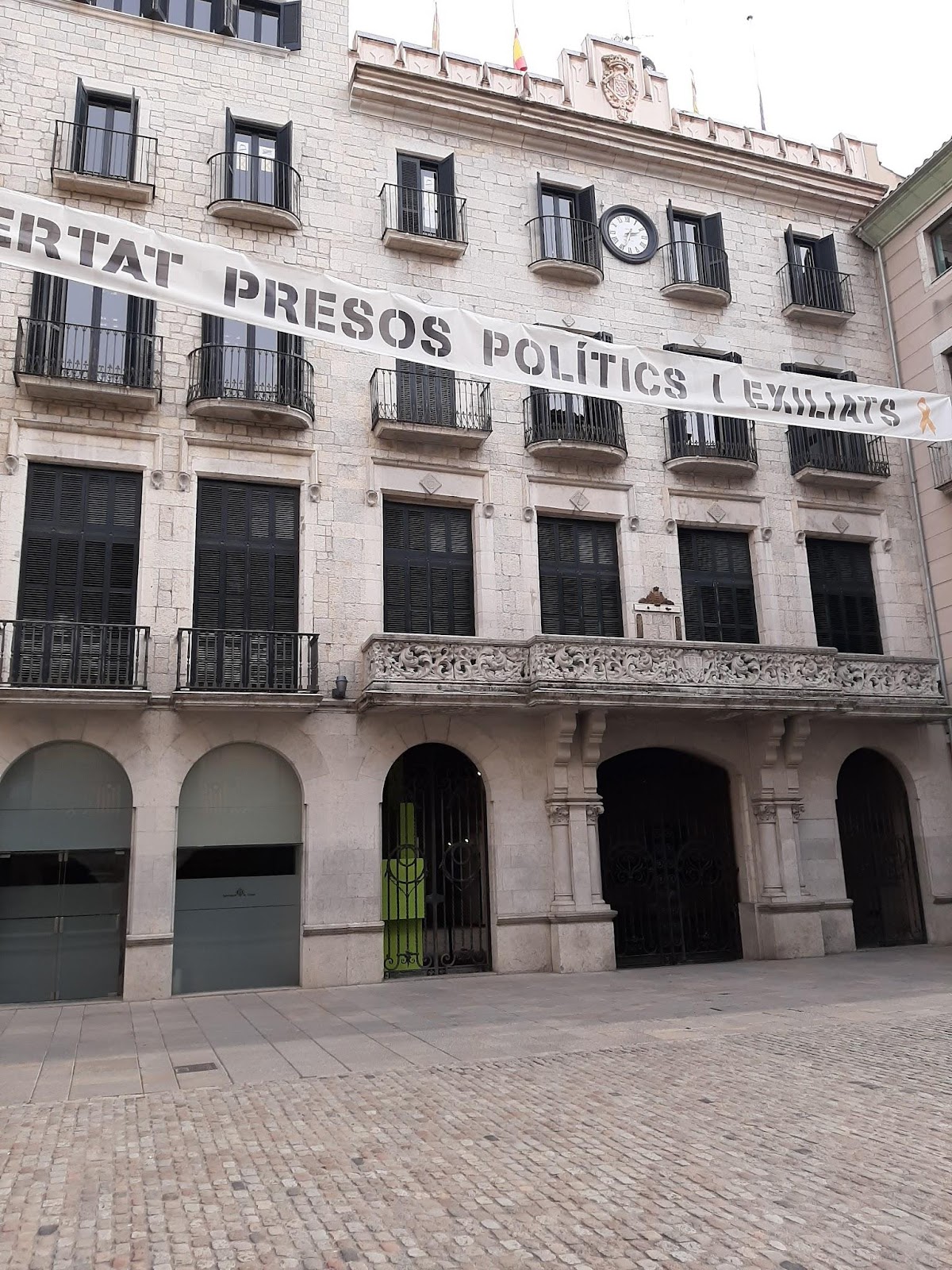 I was asked once what I thought about the supermarkets here compared to ones in the UK. The first thought that entered my head was boring and how much of my life I’ve wasted shuffling around in these places.

I tend to do most of the food shopping and we live in the Girona neighbourhood of La Devesa minutes from 4 supermarkets, so me and my shopping trolley are happy with that. Anyway, if I had to take the car I could carry more but I’d have far more work getting in all upstairs. That’s because our apartment’s parking space is underground and the block’s elevator doesn’t serve our floor. That’s another story.

Just to go back to the subject of shopping trolleys. In the UK they’re synonymous with only the elderly using them, as they trot off down the high street. After moving here and buying one I just couldn’t wrap my mind around actually using one for several months. After all, here you see both young and old pulling them around. I have even cast my inventor’s eye to imagining a suitable trolley designed for beachgoers. One that has a tardis-like space to carry everything, keep beers cold, and wide rubber wheels capable of gliding across the sand.

My local Mercadona supermarket. Leading contender for the highly competitive title of ‘Most Boring Girona Supermarket ‘. I could walk blindfold around here and still  know where to get everything. Sometimes it serves a curved ball and I get mildly frustrated when I can’t find a tin of coconut milk or some sod has bought every single pack of avocados. The product ranges remain permanently entrenched and any newly stocked item or ‘novetat’ brightens up your day. So much so that it prompts me to report on such front page news to my good wife.

The last new and welcoming thing was Sharwoods Korma Curry Sauce, a true revelation for Catalan taste buds. Sadly it didn’t last and is no more, maybe it was a novetat too far.

Some other novetats have endured and remain as part of the run-of-the-mill Mercadona family, like versions of Hummus. Any UK Tesco’s  has about 6.

It just leaves the saga of the checkout but don’t expect any help with bag filling-you’re on your own. The shop assistants could win the Olympic gold for scanning items, leaving me to play catch-up as I load my trolley. The plan of attack is simple. Heavy stuff  like bottles and slabs of coke at the bottom, followed by layers of lighter stuff as you reach the top. Never mind the next waiting customer, the assistant’s only sarcastic sounding retort is to say “parking?”

This store also has a resident beggar who sits outside the entrance all day in all weathers shaking his plastic cup at you as you walk past. If I don’t have any loose change I offer him a can of coke instead. The hard part is trying to decipher his reply which resembles more of a grunt than a clearly defined gracias! Oh well, who am I to judge.

With the latest lockdown restrictions it means we’re spending a lot more time indoors and boy is it boring.

For starters there’s a night time curfew between 10pm and 6am which forces us to remember to take the dogs out for the last time, just before curfew begins. Ordinarily that would be much later.

Bars, cafes and restaurants have already been shut for about 3 weeks, only take away allowed but that’s not enough for these owners. Some young friends who run a bar are trying to find work, any work elsewhere. The various regions in Spain have their own rules, so in Madrid you can still eat and drink albeit not late.

You can still go cycling or running , hey-ho. My preferred pastime, playing golf is banned too. Can’t see there’s much risk there but a blanket no to all sports means longer dog walks. Even weekends are affected, no movement outside of your municipality-no nice Sunday drive to the coast. That’s been annoying the last few weekends as we’ve had sunny days touching the 20’s.

Walk through the old town and it’s eerily quiet, the only places open are the ice cream shops which are doing a roaring trade. The other beneficiaries seem to be the hordes of delivery app riders zooming around.

There might be some respite towards the end of November, who knows.

Well the site is back, we didn’t really go anywhere ourselves. The previous site called MyGironaSpain.com got hacked a few years back and I kind of lost interest in trying to resurrect it all.

Of course life got in the way and stuff in general. There are always other things to do aren’t there, and it was always a labour of love. I’d started the original site over 10 years ago and added to it as time allowed.

We’re still here in Girona after almost 14 years and now I’ve got more time. My thoughts were telling me I should restart the site. As with most things and places time doesn’t stop still and Girona certainly hasn’t.

The big boom in cycling here has meant a bigger influx of tourists and professionals alike. Cycle teams like the place a lot and use the surrounding countryside for training, mountains in one direction and beaches in the other.

The climate is a big plus too. The pro-cyclists seem to have commandeered a lot of the new cafes and coffee spots, which many have been created with them in mind.

Unfortunately my own mountain bike has remained more of a fixed decorational piece! Golf is more my thing, or rather pitch and putt.

At the moment things are quiet here, the latest Covid rules have put a stop to a lot of things. At least the sun is still shining today, mid November and 19 degrees.

Work on the new site is ongoing and may take a while to sort out, organise content and put up photos and videos. 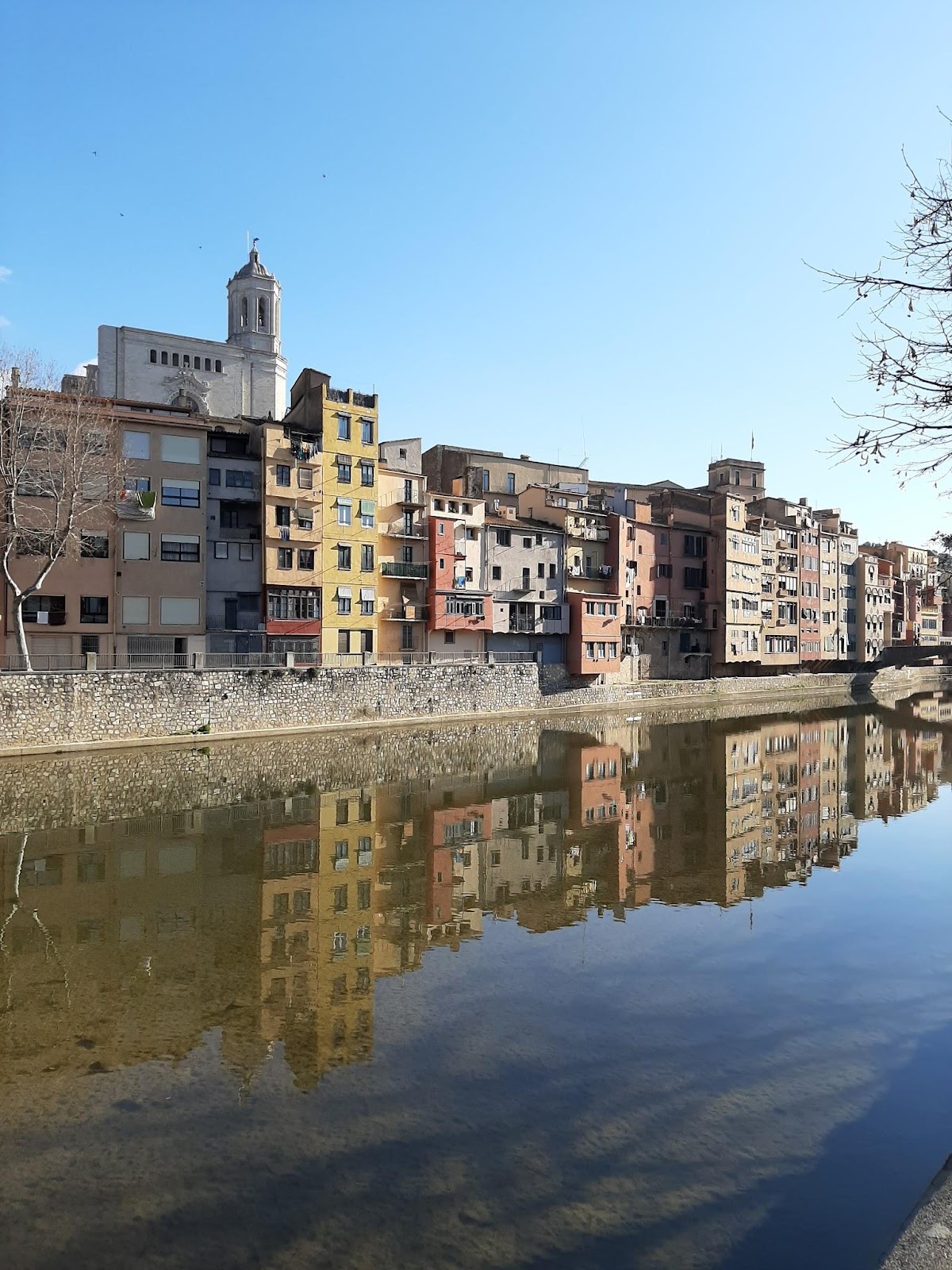